ETFGI reported today that ETFs and ETPs listed in Europe gathered net inflows of US$3.95 billion in April, bringing year-to-date net inflows to US$35.54 billion. ….

Assets invested in the European ETF/ETP industry finished the month up 2.60%, from US$859.51 billion at the end of March to US$882.20 billion. (All dollar values in USD unless otherwise noted.)

– April 11th marked the 19th Anniversary of the listing of the first ETFs in Europe.

– Assets invested in the European ETF/ETP industry have risen 14.9% year-to-date.

“Markets appear to have returned to the relative calm they had grown accustomed to over the past few years. Returns for developed indices were higher in April compared to March.

The S&P Europe 350 fell -1.42% in March, as economic data from the region continues to send mixed signals, bringing year-to-date returns to 11.85%.

The Topix 150 in Japan was up 1.14% in April, bringing year-to-date returns of 3.77%. Emerging & Frontier returns continued to outpace developed markets.

The S&P Emerging BMI and Frontier BMI finished March up 1.11% and -0.87%%, bringing year to date returns to 6.12% and 9.87%, respectively.” according to Deborah Fuhr, managing partner and founder of ETFGI. 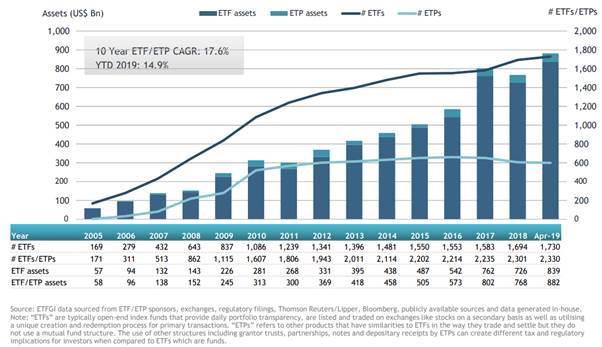 Investors have tended to invest in fixed income ETFs in April.

ETFGI report on ETFs and ETPs in Europe – June 2021